You need to be logged in to save products in your wishlist.

These animals can walk on terrain or construction, e.g. inside buildings, etc.  They cannot or should not walk through walls or other obstacles.

For the time being, they spawn without AI and so when not being ridden will just stand there.  They may or may not respond to input from other animals, but in any case they will not attack players.

On plugin reload and/or server restart, the animals spawned by the plugin will lose their rideable attributes and will also likely be culled as part of the overall animal population control of Rust.

It is possible that through this management, a rideable animal may disappear completely.  The player should be able to spawn a new one at that time.

The plugin keeps track of player animals, and any deaths should manage the list and allow for spawning of new animals.

Once mounted, the animal can be moved with the WASD keys using SHIFT to sprint.  Movement works forward, backward, and includes rotation in normal and sprint modes.

The plugin will keep track of how many of each animal each player spawns.

Currently, mounting should only be possible by the spawning player - In 1.0.4, Friends/Teams/Clan support was added, so that they can optionally also mount the rideables.

The default option of destroying the corpse on death helps prevent exploiting the spawning of animals merely to obtain meat, animal fat, cloth, and leather.

If you want your players to be able to spawn bears, they will need the rideapig.bear permission regardless of whether or not they also have the rideapig.vip permission.

All will need the rideapig.use permission.

RIDEAPIG
chat Comments (0)
No customer reviews for the moment.

error Your report cannot be sent

error Your review cannot be sent 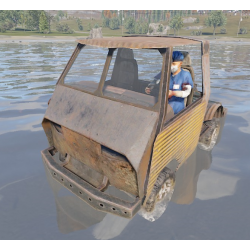